From June 15 to June 22, Fayette and surrounding counties experienced a 35-percent increase in confirmed COVID-19 cases.

The increases in one week for surrounding counties were: 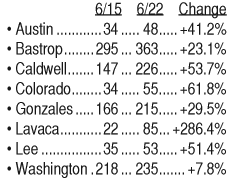 “Two of the four nursing homes reported that patients were tested multiple times after the initial positive test and all of the subsequent tests were negative. We believe that false positives are much rarer than false negatives, but both are theoretically possible. This led us to start an investigation to see if a conclusion could be reached.

“We contacted the State of Texas Epidemiology Team who informed us that unless tests were performed on the same day, we cannot be certain if there was a false positive test, or if the patients were tested at the very end of the illness and were no longer showing positive on subsequent tests.

“To date, the only known cause for false positives is for tests that had an issue with the fluid in the test tube known as the Viral Test Media (VTM). There were a large number of test tubes recalled for problems with the VTM, but the test tubes used on the day of nursing home testing were of another manufacturer.

“As with all things related to COVID-19, we are still in a learning process and we will attempt to get the most relevant information out to the public as it becomes available. Until we are able to conclusively rule something as a false positive, we will treat the case as a true positive. Thankfully, these are now in the process of being moved to the ‘recovered’ column.”